January, 2020. The review are in. The Richmond Symphony Chorus is receiving rave reviews for its recording of Vaughan Williams’ Dona Nobis Pacem and Mason Bates’ Children of Adam.
December 7, 2019. Review of Handel’s Messiah under the direction of George Manahan.  "The Richmond Symphony Chorus, prepared by Erin Freeman, was in especially fine form, both in vocal technique and character. The massed voices rang out satisfyingly in big choruses such as “And the Glory of the Lord,” “Hallelujah!” and “Worthy is the Lamb,” but the ensemble was at least as impressive in well-defined part-singing in less showy numbers and in a cappella passages." – Clarke Bustard, LetterV Blog

October 1, 2019. Review of Carmina Burana with the Richmond Symphony and Richmond Ballet. "With the Richmond Symphony and 100-some singers from the Symphony Chorus and VCU Commonwealth Singers lining the venues main level's side walls and balcony, creating a monstrously inviting surround-sound impact, the 160 or so joined Richmond's 16 dancers to offer a smashing and sensual 'Carmina.'” – John Shulson, Virginia Gazette
May 19, 2019. Review of the chorus’s performance of Carmen with Denyse Graves. "The Richmond Symphony Chorus was very much a co-star in this show, bringing lusty collective tone and genuine characterization to their crowd-scene roles. The women were gloriously riotous as the cigarette-factory girls relating the (unseen) Act 1 fight scene between Carmen and her co-worker Manuelita. ... The late James Erb, founder of the Symphony Chorus, once told me that he often sought more “operatic,” or dramatically infused, character and projection from the ensemble. He would have been gratified to hear this performance, prepared by his successor, Erin Freeman." – Clarke Bustard, LetterV.Blog

November 11, 2018. Review of Brahms Requiem with the Richmond Symphony orchestra and Chorus. "The Richmond Symphony Chorus, prepared by Erin Freeman, realized Brahms’ range of dark vocal colors in this score, excelling both in the quietly contemplative sections that open and close the Requiem and in the more dramatic and declarative “Denn alles Fleisch es ist wie Gras” (“For all flesh is as grass”) and “Denn wir haben hie’ kleine bleibende Statt” (“For here we have no continuing city”)." – Clarke Bustard, LetterV.Blog

April 28, 2017 The Richmond Symphony Chorus performs an all-choral concert dedicated to its founder, James Erb.  For the first time, many of Erb's arrangements of traditional Welsh, Irish, and American songs were recorded and will be made available for purchase.

September 18, 2015 The Chorus performs Beethoven's Ninth, fourth movement, at the opening ceremonies of the World Road Cycling Championships. "Then the voices came in, and the Ninth soared as it was meant to. ...And the Richmond Symphony Chorus, joined by the Commonwealth Singers of Virginia Commonwealth University [both prepared by Erin Freeman], delivered as compelling and high-powered a reading of the Ninth's choral finale as could be desired.  When they sang, "Seid umschlungen, Millionen" - "Be embraced, you millions" - the affection, and the urgency of it, were palpable." – Clarke Bustard, Richmond Times Dispatch 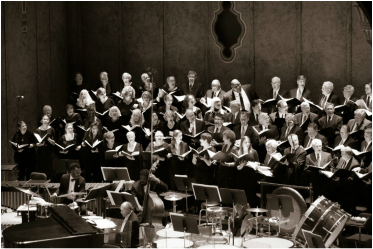 February 15, 2015: Richmond Symphony Orchestra and Chorus, with One Voice Chorus, present an "ambitious" and "breathtaking" performance of works by Duke Ellington.  The Richmond Symphony Orchestra and Chorus performed four selections from Duke Ellington's Sacred Service on February 14, 2015, with guests Lester Lynch, One Voice Chorus, and a Big Band assembled from some of the finest Jazz musicians around the Commonwealth.  Markus Schmidt, of the Richmond Times Dispatch, called the performance "ambitious" and "breathtaking", and commented on the musical flexibility of the performers, who "left no doubt that they could swing hard and strong, with the ability to go “outside” if they chose to, but retaining enough of the basics to go back “inside” and groove with the spirit of the blues."  Read the entire review here.


January 26, 2015: Virginia Choral Directors Association honors RSC founder James Erb.  This just in from ACDA:  "At All-Virginia Chorus, we will have the opportunity to honor the life of James Erb by singing his arrangement of Shenandoah."  Thank you VCDA and All-Virginia Chorus guest conductor, Dr. Brady Allred for this lovely tribute.
January 14, 2015.  Members of the Richmond Symphony Chorus perform the National Anthem for the opening session of the Virginia General Assembly.
Members of the Richmond Symphony Chorus braved an icy day to open the Virginia General Assembly 2015 session with the National Anthem.  This is the fourth year in a row the RSChorus has been given the honor of performing for the leaders of the Commonwealth.  Watch the video here.

November 1, 2015.  The Richmond Symphony Chorus performs Carmina Burana with the Richmond Ballet and Richmond Symphony.
Donned in robes and peppered through the concert hall, the Richmond Symphony Chorus performed in Richmond Ballet's historical and powerful performance of John Butler's Carmina Burana.  The Richmond Times Dispatch called the performance "rare," "memorable," and "total masterpiece," and said of the RSChorus: "The Chorus, clad in hooded black robes, surrounded the audience, both physically and with sound.  They filled the area on both sides of the orchestra pit as well as the balcony with the sheer numbers of their physical presence as well as with their swelling vocal power."  To read the full review, click here.

September 10, 2014.  Members of the Richmond Symphony Chorus perform at the State Capitol at the National Speakers' Conference.
May 18, 2014.  The Richmond Symphony Chorus was joined by the Virginia Symphony Chorus to perform Berlioz' Damnation of Faust under the direction of Steven Smith.  Sung in French, the work required the amassed chorus to become peasants, drinkers, soldiers, students, pilgrims, and demons.  They sang in French, Latin, and a made-up language worthy of the underworld.  Music critic Clarke Bustard called the performance "dramatically potent as any staged opera seen and heard here in recent years" and described the chorus as "consistently characterful and dramatically charged."  Read the full review here.

December 10, 2013:  A busy weekend yields outstanding results.  The Richmond Symphony Chorus participated in a performance of Handel's Messiah and two "Let it Snow" Pops shows - all on the same weekend.  Messiah ticket sales surpassed goals and received rave reviews.  Clarke Bustard of Letter V called this year's performance:  "one of the most dramatically charged in recent memory."  He continued:  "Erin R. Freeman ... obtained highly dynamic, truly theatrical treatments of many of the oratorio’s choruses, notably the sequence at the beginning of Part 2 that frames the alto air “He was despised,” and set markedly brisk tempos for many airs and choruses....The chorus “He trusted in God” and the bass air “Why do the nations so furiously rage,” both in Part 2, came across with real fury. The chorus “O thou that tellest good tidings to Zion,” in Part 1, which can sound rather ceremonial, here was a joyful outburst......The Richmond Symphony Chorus, its singers mixed rather than divided into sections, sang with energy, expressiveness and generally excellent diction.....The large audience attending this performance showed none of the tell-tale signs of restlessness. Chances are, the roaring ovation at the end would not have been diminished if the five missing numbers, adding about 8 minutes, were performed as well."  Anne Timberlake of The Richmond Times Dispatch wrote:  "Fortunately, “Messiah” isn’t something you tire of, as the Richmond Symphony and the Richmond Symphony Chorus proved Friday evening at the Carpenter Theatre in a vigorous rendition of Handel’s masterwork. Erin Freeman led the annual performance, which featured vocal soloists Michelle Areyzaga, Kendall Gladen, William Ferguson and Sumner Thompson in a 21/2-hour-plus megadose of the beloved work.   Friday’s “Messiah” featured brisk tempos — the better, perhaps, to dispatch the work in under three hours — solid vocal runs and precise synchronization of consonants by the Richmond Symphony Chorus."  The Annual Let it Snow Pops concert was the highest selling Holiday Pops in the Richmond Symphony's 50+ year history.  Featuring the RSChorus, the Richmond Symphony Orchestra, Soprano Lisa Edwards Burrs, and a children's chorus created for the occasion, the concert ran the gamut from traditional classics, such as Berlioz's Shepherds' Farewell, and unexpected surprises, as in the music from It's a Wonderful Life.
October 21, 2013:  Verdi Requiem.  The reviews are in! In Letter V, Virginia's Classical Music Blog, Clarke Bustard said: "Intense quiet was one of the most effective tones of voice in this choral performance.  From the opening "Requiem" through the conclusion of the Mass, the Symphony Chorus created striking effects of shadowed tone and distance in its sotto voce singing.  In louder and more turbulent passages, notably the recurrent Dies Irae, the choristers projected energy and passion, and demonstrated gratifying attending to detail in more complex sections."  Anne Timberlake, in the Richmond Times Dispatch, wrote "Perhaps most satisfying were the crisp consonants and dynamic contrasts of the perennially fine Richmond Symphony Chorus. Like that sizzling bacon, the chorus, a community institution for many decades now, seldom fails to sate."  Read the full reviews here:  Letter V  and Richmond Times Dispatch.

June 1, 2013: Congratulations to Alto Ellen Broen.  We are proud of Richmond Symphony Chorus alto and member of the RSO Vocal Apprenticeship Program, Ellen Broen, for receiving a scholarship to the Westminster Choir College.  Ellen will pursue her Masters in Vocal Performance and Pedagogy, studying with Laura Brooks Rice.

April 15, 2013:  Auditions for 13-14 season announced.  The Richmond Symphony Chorus will offer to rounds of auditions for prospective members.  The first round will be May 7, and will cover the entire 13-14 season.  Another round will be offered in August, and will cover membership in the chorus after the October performance of Verdi Requiem.  For details, visit our Auditions and Membership page.

March 30, 2013:  Repertoire Announced for the 2013-2014 Season!  The Richmond Symphony Chorus will feature prominently in next year's season with large projects, intimate performances, and grand traditions.  Repertoire includes:  Verdi Requiem, to celebrate the 200th anniversary of the composer's birth; the annual holiday traditions - Let it Snow and Handel's Messiah; Handel Coronation Anthems with the Richmond Symphony Chamber Chorus; and Berlioz's Damnation of Faust, in a partnership with the Virginia Symphony Orchestra Chorus.  And, as usual, additional projects will arise throughout the season.  To audition for the Richmond Symphony Chorus and participate in this exciting season, visit our Auditions and Membership page.

February 16 and 17, 2013: The Richmond Symphony Chorus performed Mozart's Requiem to record-breaking crowds at the Richmond Symphony's fourth masterworks concert of the season.  Generating the highest ticket sales in the 56-year history of the RSO, this concert also featured John B Hedges' Prayers of Rain and Wind for double bass and orchestra (and a cameo appearance by the RSChorus).  Clarke Bustard, of Letter V - Virginia's Classical Music Blog, said "The Symphony Chorus, which Freeman directs, brought a welcome combination of heft and sensitivity to detail in the Mass." He also remarked: "The conductor and musicians, including an offstage chorus intoning a Southern gospel melody, reveled in the colorful score Hedges crafts for the orchestra."  Anne Timberlake of the Richmond Times Dispatch said "Freeman conducted, impressively, from memory, and the always well-prepared Richmond Symphony Chorus performed with dramatic intent." 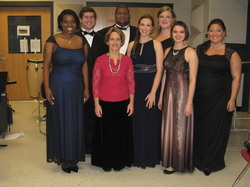 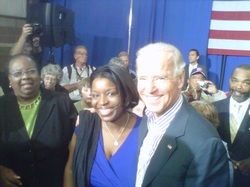 July 4, 2012:  The Richmond Symphony Chorus sings the National Anthem at the Flying Squirrels game on Independence Day. The umpire said it was the best version they've ever heard at the Diamond. Click here for more information. And, watch the home video here:
May 2012:  The Richmond Symphony Chorus joins the Virginia Symphony Chorus and Virginia Symphony to perform Mahler's Symphony No. 8 as part of the Virginia Arts Festival.  (See picture above!).   Conducted by JoAnn Falletta, the work played to full houses. Read here for more about this historic collaboration.

May 2011:  The Richmond Symphony Chorus celebrates its 40th anniversary with a performance of Beethoven's Monumental Missa Solemnis. Read the reviews here:  Letter V  and Times Dispatch.